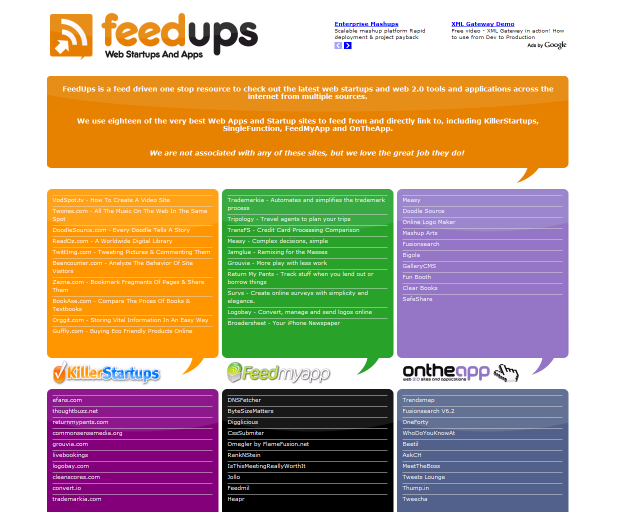 FeedUps is an online feed aggregator for news about Web 2.0 tools and services. It provides a one-stop resource for quickly scanning 18 popular sites focusing on Web startups and applications.

There's also a Yahoo Pipes Mashup for startup news available as an RSS Feed via http://feeds.feedburner.com/feedups

Australian electronic music artist Pogo has started a blog at http://pogotracks.blogspot.com/ currently featuring an FAQ and a list of interviews. His unique sound comes from the sampling, sequencing and reimagining of popular childhood movies. Tracks are constructed using sounds lifted from movie scenes (sometimes entirely), drums, bass and percussion.

Melodies are formed using cut-up dialogues in a non-lexical vocal style; "There are no definitive lyrics to my tracks because I have never intended to form sentences with the samples I use."  The music is then synced to video cuts from the original movie to create a new mini-trailer.

Pogo has a growing fan-base on YouTube where fresh uploads and the viral potential of video widgets quickly attract thousands of visitors. Creations such as Expialidocious have now reached far in excess of half a million views. You can browse the growing collection of mashups at http://www.youtube.com/user/Fagottron

Today, Sony Pictures Entertainment claimed that 'Bangarang' is an infringement of copyright, and the video has been removed from YouTube. I suppose this had to happen eventually given the kind of world we live in. (September 10th 2009).

Unfortunately this is a common experience for remixers of controlled media, such are the constraints of heavily restricted copyrights. However you can still play and download the full track here (while it lasts!)

Barry Adamson: "Something Wicked This Way Comes" (from Lost Highway)

From the album Mashed in Plastic: http://www.mashedinplastic.co.uk

Video by The Reborn Identity: http://www.rebornidentity.com

From the album Mashed in Plastic http://www.mashedinplastic.co.uk

Mashup and video by The Reborn Identity http://www.rebornidentity.com

A  mashup by Totom of Smashing Pumkins and Mulholland Dr by David Lynch - Video by Titus Prime for the Mashed in Plastic project.

Version 1 has a shorter intro and different video cuts than Version 2 shown on the Mashed in Plastic site.

From the album Mashed in Plastic

Video by The Reborn Identity

TARDIS: Back in time - What if The Beatles had used Creative Commons Licenses?